This page will show session availability, links to notes and charts for download, an FAQ area and some useful links and info for students.

From conversations with many people who started learning piano and then gave up there seem to be two main factors
1) choice of music and,
2) scales!
The first of those is simple to deal with. Especially for beginners as the musical patterns and techniques necessary can be found in a wide variety of music forms and it's easier to learn and progress if you like what you're playing.
If you stop liking the piece you're playing then drop it and try something else that can develop the same musical components.

As you get more proficient learning new pieces is less of a slog.

It isn't quite as easy taking the pain out of scale practice...but possible.
Scale work is necessary for developing good muscle tone, control, flexibility and speed. Being able to use your hands well on the keyboard is a crucial aspect of Keyboard Versatility.

At the early stages of learning scalework should not be over done and if it starts making the musical mind numb then the benefits are reduced.

The KV course introduces scales in a slightly different way (move over C Major) and a lot of attention is given to good hand and finger position. It's possible to get the right results without going doo lally from repetition.

There is a mass of ongoing debate about the degree to which a modern digital piano can replicate the sound of the real thing. In truth few people are going to afford a machine that could totally reproduce the tones and dynamic shifts of a first class Yamaha, Steinway or Bosendorfer. There's simply far too much complex interaction between a vibrating string and a wooden soundboard.
It is though quite surprising how close a sub £400 digital piano can get these days.
Regardless of aural aesthetics though there is another reason why you might go digital - sanity!
Not necessarily your own but your co-habitants and neighbours. There are going to be times when you repeat the same mistake, play the same passage or run round a cycle of exercises on a daily (or perhaps more) basis. Being aware that you are inflicting a nervous breakdown on someone will inhibit your own development, it may make you reluctant to practice effectively.
Being able to drop the volume or use headphones will not only enable better progress but will help make the world a happier place!

You can pump up the volume when you've got everything working and performance ready, the odd bit of surprised adulation can be a wonderful reward for all that toil!

Now that the Keyboard Versatility course is no longer part of a University framework it is not possible to award a certificate that counts towards a degree or other qualification.
For students who would, however, wish to undertake an examination and receive a written appraisal we are happy to do so.
Any examination would take place at the completion of the course and then following a suitable gap for self-directed development. Through this gap period email support would be available along with one to one lessons. The examination would only assess areas covered in course objectives.

ABRSM Grades For those interested in examination for ABRSM grading we can put you in touch with a local piano teacher for an assesment. In many respects the KV course is ahead of the early (and some of the later) stages of the ABRSM syllabus, however we always advise students to book some lessons with a teacher who is working in this area full-time.
Knowing something and passing an exam in it can be subject to quirks sometimes and the set pieces may be very different to KV material.

Learning to sight read music, as an adult, can be very challenging. There's a logical argument that children learn to sight read music far easier than adults because they are taught at a time when they are 'tuned in' to language learning and written music is itself a language. In the bad old days piano teachers would rap a pupil with a stick if they were suspected of playing 'by ear' whereas, in modern times, it is recognised not only as a special skill but one which requires a great deal of understanding of music.

The KV course takes a slightly different, and hopefully more logical, approach to 'reading' music than is often found elsewhere.

Firstly we recognise that reading music notation and translating it into actual music is going to be very difficult if the student has to look away from the page to their hands and then look back up and find their place on the page again.
Hence the name 'Keyboard Versatility', the relationship with the piano keyboard, for the hands, ears and eyes, and it's musical structures and possibilities comes first.
Secondly we take quite a rigorous look at the mechanism of written music with an emphasis on the fact that, technically it is two separate languages combined- pitch and rhythm.
It's possible to take any piece of written music, ignore the rhythm aspects and just play the pitches however you want. It may sound odd but it would still, technically at least, count as 'musical'.
Similarly it's possible to ignore all pitch information and just play the rhythm, even on one note! Again, it would still be musical, just perhaps not very appealing.
In the later stages of the beginners course we break down the language and then start working with Lead Sheets. These are, often simplified, versions of music containing only the basic melody in notation form and the chords as symbols. At that point we will already have done a lot of work on chord structures and symbols.
Working with a full piano score is left to the Intermediate course.
One way to make the process easier is to work with something known, that way the ears can provide a helpful guide.
In the end though there are many talented musicians who work 'by ear' and the KV Beginners course doesn't require notation to progress.

Audacity is a free, open source, software program that can be very useful if you are learning a section of music and the score isn't available. Firstly it can record a piece of music from the web, youtube, CD etc and allow you to cut out a specific section, slow down the tempo (without changing the pitch) and even reduce the volume of other instruments!
You can then export that section to your MP3 player, tablet of phone and pick out the bits you want at the piano.
It takes a bit of getting used to but there is a lot of online help.
Safe download from Audacity 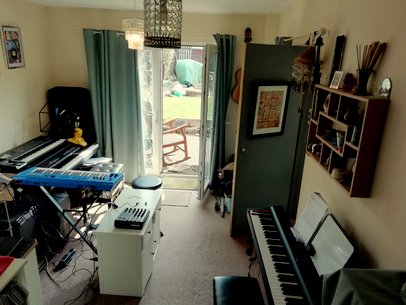 The courses are running in our music studio just outside Beith in North Ayrshire. Type KA15 1HD into google or see contact page for a map and directions. 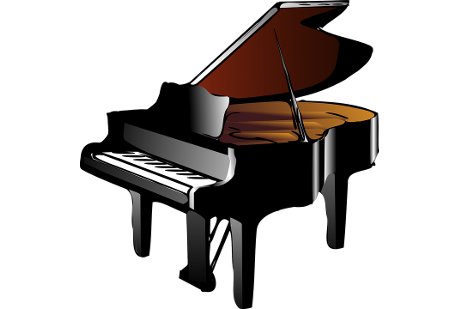 The sessions are for individuals or pairs and a modern digital piano is provided for each student.

The sessions are friendly, informal and supportive and students are encouraged to question and explore all aspects of music making.

“The notes I handle no better than many pianists. But the pauses between the notes - ah, that is where the art resides.” ― Artur Schnabel